After several days of research, I decided to try
Genius Hour
in my first-grade class.

What actually happened: Made a chart while asking each kid individually because I wanted their real thoughts, not "He took mine" as usually happens in whole group. Got some great questions/ topics and a few from a previous Growth Mindset activity- I want to learn to do a backflip/ cartwheel type things,

The plan: We will have a themed Show and Tell (more hype!) and bring something that shows we are a genius. This is not an opportunity to bring a toy to school. Repeat: Do not bring a toy!

What actually happened: One girl brought a toy, of course.
Only two other children (out of twenty-six) "remembered" (written in their agenda- parent's sign each evening) to bring anything- a hand-drawn picture of Slenderman and a picture of Gravedigger.

The plan: I displayed a large selection of nonfiction books on the carpet.

What actually happened: I called them in "weekly order" to choose a book. The Slenderman artist was very excited about a large picture dictionary but someone else chose it so he threw a major fit. He had to leave the room for the next 20 minutes. I gave their purpose for reading- learn something interesting! After nine minutes of incredibly focused Read-to-Self, they each wrote a sentence about their learning and illustrated it. Except for the guy who chose the picture dictionary. He didn't write anything.

The plan: No hype. I put animal nonfiction books, a space book and the picture dictionary on the carpet.

What actually happened: Someone else chose the picture dictionary, T started to throw a fit but I explained that he would not get his popcorn treat. He calmed right down and chose a dolphin book. They were really interested AGAIN, wrote a sentence and illustrated.

Next Friday
The plan: We're having a Art Genius Hour! Watercolor paint, Bingo daubers, mosaic shapes, stickers and markers. Can't wait to see what they come up with!
Posted by make.share.give at Tuesday, April 02, 2019 3 comments:

My regular exercise routine includes Leslie Sansone's Walk Away the Pounds videos with weights, laps around school on my breaks and my favorite- walking around our community trail. It helps maintain my weight loss from a few years ago, but my waist is still thicker than I'd like.
An ad popped up while playing Candy Crush and instead of ignoring it as usual, I installed it! Eight-Minute Abs- a twenty-eight day program with 11 different toning exercises- 30 seconds each with 15 second rest breaks in between. It seemed easy-ish on Tuesday, but the past two days have kicked my tail. Planks, lunges and squats. Squats where you jump.
It also has a pedometer. I carried my phone during my laps. Before lunch, it said I was 200 steps away from burning off calories equal to a hamburger. Pretty cool.
The next program I plan to try is supposed to make your hiney look like a peach. We'll see how the abs turn out and go from there.
Posted by make.share.give at Friday, March 15, 2019 2 comments:

We're celebrating my mom's birthday today. Which reminds me...

Since last March I celebrated my 50th birthday.

My 50th birthday like all previous birthdays, the big one,
highly anticipated, best day of the year
My 50th birthday during which I attended a funeral so I dressed up
wearing a shorter than usual dress with 3/4 length sleeves
My 50th birthday when unfortunately I came in contact with bedbugs
which ate me alive but only on the back of my thighs and wrists-
the exposed areas from the aforementioned dress.
My 50th birthday. The one where my mom says I get a do-over.

Follow-up: The school nurses looked at each other knowingly when I named the funeral home, as if they'd dealt with this before. But in their defense, I also hugged a lot of people, rode in a rental car and ate at a church dinner. A few uncomfortable, itchy days and a prescription of steroid cream and I'm good as new!

I borrowed this awesome Since last March...format from fellow Slicer Elizabeth and have many different topic ideas. Just you wait and see! I think it would be a perfect pre-writing activity with my kiddos for a 1.4 paragraph.

Yesterday I rushed around getting ready.
Today I fried bacon and French toast and ate in my jammies slowly.

Yesterday I read with 20 kids (five were absent)
Today I read by myself slowly.

We're reading Wild Robot Escapes, the sequel to Wild Robot which I discovered during Global Read Aloud a few years ago. My kiddos and I are extremely attached to the characters. As a Before reading activity, I suggested they decide whether this story touches their heart or their funny bone. We sort our #bookaday read-alouds this way often, so I knew they could handle it.

The sentiment is there- they agreed about how sweet the story is, like the original and playing hide and seek. Both boys ALSO thought the story touched their heart, literally. If you haven't deciphered first-grade handwriting lately, it says "Gross," "Skwert," and "This is weird," while actually touching a heart. They crack me up. I love my job!

Back to school after a five-day weekend! Caught up on stuff from last Thursday. Felt like Monday so forgot ice cream twice- didn't take up money until after Block, then didn't eat it. Thank goodness, there's always tomorrow.
Proud to say my middle readers are building skills and improving. Still concerned about lower readers- more than usual. Lots of absences, sleepy, low motivation. But we'll keep at it for 55 more days.


Meal-prep Slice I'd forgotten about the Safety PD.
Good stuff to learn but thankfully, haven't used it.
Links to previous Slices
Posted by make.share.give at Tuesday, March 05, 2019 1 comment:

I'm enjoying looking back at previous slices from each day.
Wonderful memories!

My Operation Christmas Child Shoebox theme this year is Fun! I'll still include a few useful items like tote bags but emphasize toys and novelty stuff.

Colton plans to participate in Track this Spring with Special Olympics. Anything to keep us moving, especially outside. He started Bowling earlier this year, but we didn't finish out the season.

Today's moments that will become memories...

After church, we went to World of Wheels Car Show in Huntington, WV.

Then, Red Lobster! Bill ordered Coconut Jumbo Shrimp as an appetizer. It came with the most amazing Pina Colada dipping sauce- sweet and yummy. I found the copycat recipe online.

It snowed all day today and started sticking about 3:00. Big pretty flakes. Maybe one more snow day tomorrow?
Posted by make.share.give at Sunday, March 03, 2019 No comments:

Still in our jammies! A rainy, cozy day. So much flu/ strep in our county that school was cancelled again so everybody can recover. No sickness at our house so we're just enjoying! Planning to take some stuff to Goodwill, get a few groceries and maybe a haircut.

Here's a pic of my Temperature quilt so far... 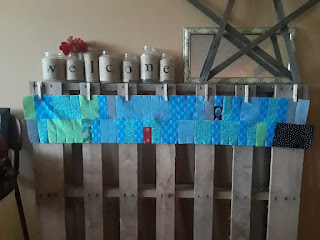 January and February's weather
in Grayson, KY
according to accuweather.com
March is certainly coming in like a lion!


Link to seven years
of starting strong with Slicing
Posted by make.share.give at Friday, March 01, 2019 No comments:

Older Posts Home
Subscribe to: Posts (Atom)
This little blog is about some of my favorite things, like Grace Livingston Hill books and quilting, but also about fun little things I come across through the day.

April is Autism Awareness month. Please be especially kind to and patient with people with Autism.

If you are new to Grace Livingston Hill's books, I think you should start by reading...